XSTAT by RevMedX – Revolutionizing the way we heal gunshot wounds

Courtesy of RevMedx The sponge-injecting syringe, XStat, can stop hemorrhaging in fewer than 30 seconds.
by ELIZABETH WANG Feb 5, 2014 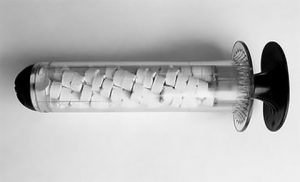 The world is geared toward the need for speed. The battlefield is no exception. RevMedx, a Portland, Ore., startup, has designed a way to stop hemorrhaging in 30 seconds or fewer. XStat, a pocket-sized, sponge-injecting syringe, offers a convenient, time-saving method for military medics to stop severe blood flow.
“It’s a form [of treatment] that medics wanted to carry,” said John Steinbaugh, RevMedx vice president. He served in the U.S. Army for 25 years – 20 of which he spent as a Special Forces medic, partly in Iraq and Afghanistan. Talking with other medics, Steinbaugh narrowed down the main problem they were facing in the field. Combat gauze was just not an effective use of time, prompting Steinbaugh and his team to invent a portable, quick solution to the problem.

Currently, XStat applicators come in two sizes: 12-millimeter and 30-millimeter diameter syringes, used based on the size of the wound. The larger one comes with 92 compact 1-centimeter diameter sponges, designed to expand up to 15 times its size once in contact with fluids. Each sponge is marked with an “X,” visible with X-rays, to ensure all sponges are later removed from the wound. Once packed into the wound, the sponges directly apply pressure from the inside, allowing medics to save a tremendous amount of time. They no longer need to spend three to five minutes applying pressure to the wound, waiting for the bleeding to cease. If the blood does not stop after the first attempt, medics must remove previously used gauze and repeat the process.

“It’s not just seconds [saved], but minutes,” Steinbaugh said. “On the battlefield, that can seem like an eternity.”
The U.S. Food and Drug Administration has not yet approved XStat, but RevMedx is conducting various tests on mannequins. The company this week announced it has received $5 million from the U.S. Army to fund development and production of the design.

“I think it’s going to be a game changer,” said Pam Jackson, co-founder of Panakeia, a medical military product marketer and distribution company. “If it can stop bleeding in 15 seconds versus three minutes, you’re going to save a lot of lives.” Dane Adams, first class hospital corpsman in the U.S. Navy, has worked as a trauma medic in Iraq and Afghanistan. He now works at Capt. James A. Lovell Federal Health Care Center in North Chicago. Though he does think the time issue may be resolved, he prefers traditional training methods. “It depends on the location of the wound,” he said. “Our training in the last decade has really changed in terms of tourniquet use. It’s a very effective tool.” But if it becomes a viable option, Adams said he thinks it could work, especially when it comes to eliminating the need to have to lay next to or stand with an injured soldier during a firefight. Steinbaugh said each medic would most likely carry two to three packets of three syringes each. He said this could essentially replace medics having to carry five “bulky” rolls of combat gauze – one XStat absorbing three times as much as a standard roll. With the potential success of the syringe, Steinbaugh said he is also looking to expand and modify the product to help postpartum bleeding.
“It just improves the whole situation,” he said.