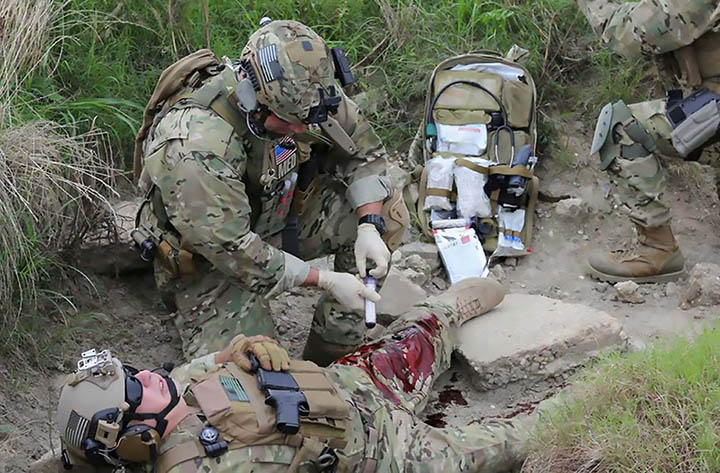 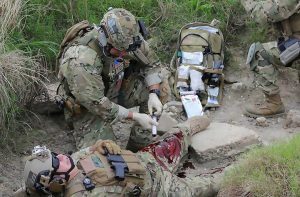 RevMedx, Inc. today announced that the XSTAT hemostatic device has been successfully deployed on a patient in a field setting. The use of XSTAT on a soldier was the first documented clinical use of the product since its release. After failing to staunch severe bleeding in the patient using standard hemostatic technologies, a United States forward surgical team (FST) used XSTAT to achieve almost immediate hemostasis.
Based on information released from the US Military, a coalition forces soldier was wounded in action with a gunshot wound to the left thigh. The femoral artery and vein were transected and damage to the femur and soft tissue left a sizable cavity in the leg. After a self-applied tourniquet stopped the bleeding, the patient was transferred to an FST for evaluation and treatment. After proximal and distal control of the vessel was achieved, several hours were spent by the team trying to control residual bleeding from the bone and accessory vessels. Throughout the course of the roughly 7-hour surgery, multiple attempts at using bone wax and cautery on the bleeding sites were unsuccessful and the patient received multiple units of blood and plasma. Eventually, the FST team opted to use XSTAT and applied a single XSTAT device to the femoral cavity— resulting in nearly immediate hemostasis. The patient was stabilized and eventually transported to a definitive care facility.

XSTAT is a first-in-kind hemostatic device for the treatment of severe bleeding in the axilla or groin area (known as junctional wounds). XSTAT works by injecting a group of small, rapidly-expanding sponges into a wound cavity using a syringe-like applicator. In a wound, the sponges rapidly expand and exert hemostatic pressure. Each sponge contains an x-ray detectable marker to confirm complete surgical removal when definitive surgery is performed.

“The first-in-human experience with XSTAT is the culmination of tremendous effort on the part of both RevMedx and our military collaborators,” said Andrew Barofsky, president and CEO of RevMedx. “We are pleased to see XSTAT play a critical role in saving a patient’s life and hope to see significant advancement toward further adoption of XSTAT as a standard of care for severe hemorrhage in pre-hospital settings” said Barofsky.