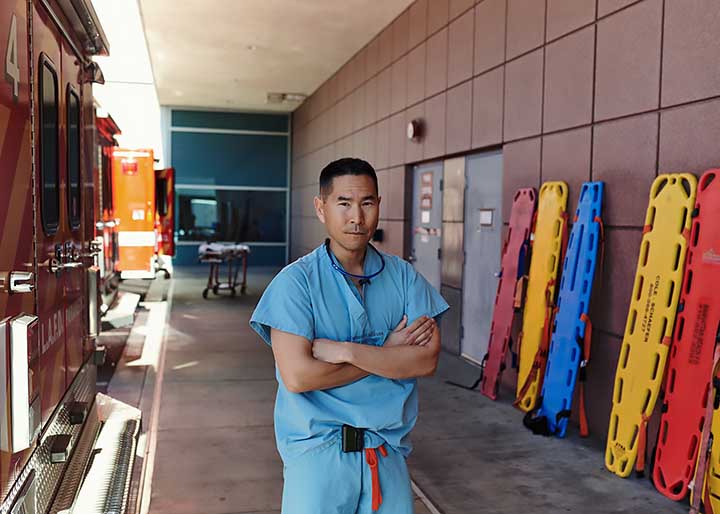 Tina Rosenberg
FIXES MARCH 20, 2018
Dr. Kenji Inaba outside the emergency entrance at the Los Angeles County General Hospital.CreditJake Michaels for The New York Times
Kenji Inaba is a trauma surgeon at Los Angeles County General Hospital and director of the surgical intensive care unit. He’s also a sworn reserve police officer, part of a two-man patrol in the Rampart Division of the Los Angeles Police Department. Between policing and doing emergency surgery, he gets a lot of exposure to gunshot wounds, both entry and exit — how people get shot, and how they get better.
In his police car he has a bag with basic medical emergency equipment, along with something that’s not so basic — a syringe called Xstat that is full of tiny, absorbent sponges to stop the bleeding from a gunshot wound. It’s one of several new and almost-new pieces of technology that can keep a shooting from becoming a murder.
We rivet our attention on guns when a mass shooting occurs. But those shootings make up only a tiny fraction of homicides. As for the rest, they are concentrated among young men of color. The gun death rate among white males is 17 per 100,000, with a vast majority suicides. For black males the numbers are 34 per 100,000, with a vast majority homicides. For black males between 20 and 29, the rate is 89 per 100,000.
Many grand reforms could help lower those statistics by addressing policing strategies, gun policies, institutional racism, police-community relations and the economic fortunes of poor neighborhoods.
But technology can also make a difference.
Most gunshot victims die of blood loss. Xstat is a new product that can stop the bleeding from penetrating wounds — from guns, knives, shrapnel, whatever — that are narrow and deep. It’s especially useful for wounds in the hip or shoulder, where tourniquets cannot be applied. Xstat’s sponges instantly absorb the blood and expand to put pressure on the wound. They’re physically tagged with a marker that will show up on an X-ray so that doctors can check that they were all removed. 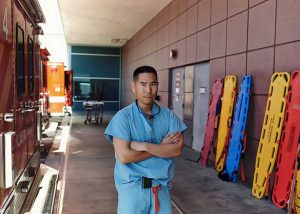