FDA clears XSTAT® for the treatment of severe bleeding from gunshot and stab wounds in arms or legs. 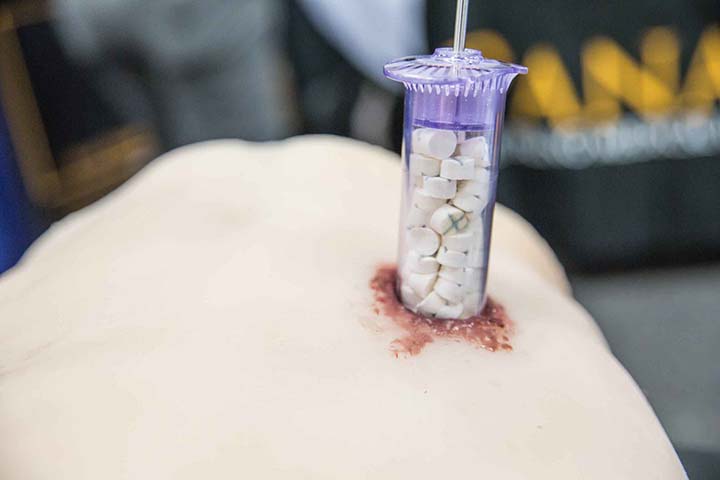 WILSONVILLE, Oregon, USA August 22, 2017
FDA clears XSTAT® for the treatment of severe bleeding from gunshot and stab wounds in arms or legs. XSTAT can now be used on many types of injuries seen in prehospital trauma and battlefield settings. RevMedx, Inc. announced today that the FDA has cleared the XSTAT 12 and XSTAT 30 hemostatic devices for the control of severe, life-threatening bleeding from narrow entrance extremity wounds.  Previously limited to treating junctional wounds in the groin or shoulder area, XSTAT devices can now be used to treat severe bleeding from bullet or knife wounds located in an arm or leg.
XSTAT 12 and 30 work by injecting a group of small, rapidly-expanding sponges into a wound cavity using a syringe-like applicator. In a wound, the sponges rapidly expand and exert hemostatic pressure. Unlike traditional methods that may take several minutes to be effective, XSTAT can stop bleeding in seconds to stabilize injuries until patients reach an emergency facility.  The XSTAT 12™s smaller applicator, approximately 12 mm in diameter, enables treatment of narrow-entrance wounds from small caliber ammunition and stabbings.  Since its launch in 2014, there have been numerous successful uses of XSTAT devices in civilian and military pre-hospital settings.
“We are pleased with the FDA™s decision to add extremity wounds to XSTAT™s marketing clearance,” says Andrew Barofsky, RevMedx’s CEO. “Our mission is to reduce death and disability from traumatic bleeding injuries caused by war, violence or accidents.  The expansion of XSTAT™s indications accelerates fulfillment of this mission by providing first responders with an additional capability to treat penetrating injuries located in an arm, leg, shoulder or groin.
Early control of severe bleeding may prevent shock and may be life-saving.  The United States Army Institute of Surgical Research reports that 30 to 40 percent of civilian deaths by traumatic injury are the result of hemorrhaging; of those deaths, 33 to 56 percent occur before the patient reaches an emergency care facility.
About RevMedx
Based in Wilsonville, Oregon, RevMedx is a privately held medical device company whose goal is to design, develop, and manufacture innovative medical products that save lives. Our product line includes XSTAT, XGAUZE, AIRWRAP, PARABELT, SHARKBITE Blast Injury Kits, and TX Series Ratcheting Tourniquets.  Additional information about RevMedx and our products can be found at www.revmedx.com.
Media Contact:
Will Fox
VP Sales & Marketing
Phone: (503) 218-2172
Email: will.fox@revmedx.com
WILSONVILLE, Oregon, USA August 22, 2017